Good evening. I am Greg Moore, the founder of K Square Law. I am here to introduce this year recipient of the Commonwealth Award. This award is the most prestigious award the Council presents. In recent years it has been my privilege to introduce recipients George Hatsopolous, founder of Thermo Eelctron; Leo Beranek, founder of BBN; Neil Papalardo, founder of Meditech; and legendary venture capitalist Paul Maeder. The award has also been given to MIT. Tonight we have the honor of presenting the award to John Cullinane, whose passion for technology and people has resulted in a career filled with integrity, respect, and success.

John is receiving this award because he had one transforming idea, and with that idea he put the Massachusetts computer software industry on the global map. Incidentally, he was one of the founders of the Massachusetts Computer Software Council, a predecessor of the Mass TLC, illustrating his life-long commitment to giving back and helping the next generation of entrepreneurs.

John’s big idea created an industry: the software industry. Before John, there were two types of companies: hardware companies, who sold software only because they needed to make their hardware work, and consulting companies, who were not really in the business of selling software, but selling their services writing the software. John’s insight was simply this: if he created a program for one customer, he ought to be able to sell it to many customers.

The big idea created Cullinane Corporation: the first software company in the world to go public, the first to be listed on the NYSE, the first to reach a billion dollar valuation was the Apple of its day–and the first to do a Superbowl ad. And all this happened right here. In Massachusetts.

John was born in Arlington to Irish immigrant parents. He went to school at Arlington High and was recently inducted into their hall of fame. After an extremely positive coop experience at Northeastern he got a job at Arthur D. Little, which in 1955 had one of the first commercially available computers in the United States.

After a couple of other jobs, John was recruited by a database consulting company to open up their Boston office, which was budgeted to lose $20,000 the first six months. Instead he made a $20,000 profit. John was selected for an outstanding performance award. He mused about how large the award would be, $5,000, $10,000. The day for the big award came, the president flew up and shook John’s hand and told him he was delighted to give him $500 payable over three years. John knew the only way he was ever going to make money in this business was to start his own company. So in late 1968, armed with a software products company proposal and letters of support from multiple potential customers, John headed for New York City, where he raised $500,000. Cullinane Corporation was born.

It went public in 1978 and had 29 consecutive quarters of >50% growth. In 1989, it was sold to Computer Associates. But even today, 23 years later, the product that built Cullinet, IDMS, is going strong. If you troll the Internet, you will find scores of people who say it is still the best database product on the planet.

As all of the entrepreneurs in the audience can attest, with any new venture there are multiple ups and downs before success is realized. You can be down to your last dollar one minute and your name up in lights the next. This literally happened to John when, after a few years of hardship, he pulled up to a Cullinane user conference at a hotel in Las Vegas. Under the names Steve Lawrence, Eydie Gorme, and Norm Crosby was “Cullinane”. The cab driver dropping him off remarked to John, “Who’s this Cullinane guy, anyway? John just laughed and said “It’s me.”

Hi John, I hope you are well and want to thank you again for all your assistance in helping us to refine our message and Project Purple program offering…Since we last met, Project Purple continues to experience tremendous growth, positively impacting the lives of teens and young adults across the country.

Click here to learn more about the Purple Project

Mr. Cullinane, I hope this email finds you well. It’s been a few months since our paths last crossed but I wanted to bring you up to speed regarding proud “NU grad” Brigham Hyde’s company, Relay Technology Management.

Since the three of us had breakfast Relay TM has taken off and generating some serious revenue “at least we think so!”

We took your advice and made an effort to get as many LOI’s as possible in order to take it to VC’s for our series “B” raise. Well… we got more than LOI’s and and actually booked some great business!

I am also emailing you to inform you I have moved on to work for another tech start up called ByteLight. They have built some incredible technology that permits LED Lighting to send data to a mobile handset. Not to bore you with the details but there are a million ways to make money with the technology.

Although you are somewhat retired and hopefully golfing and fishing, if you ever have time for a cup of coffee I would love to introduce you to the co-founders of ByteLight, Aaron Ganick and Dan Ryan.

However, in interest of full disclosure they graduated from BU but are both great guys who are eager to learn and are very talented engineers who are learning the “business” side of things.

Once again thanks for meeting with myself and Brigham a while back and hope to see you soon.

PS…I loved your book and read it on occasion to remind myself to remember to “listen to the customer.”

Hit ’em strait and I hope you are knocking the Stripe Bass dead!

Thank you so much for coming into speak with us yesterday. Everyone was really excited by the training. We have our Main Message posted at the front of the main office room, next to Stanley: 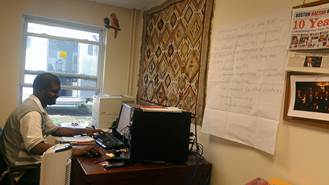 The training not only generated an effective Main Message, the process has, as advertised, pulled all of our talented and highly opinionated staff on board with it. This new tool comes at an especially good time for us, as we are entering a critical fundraising period, when we need to raise the lion’s share of our budget in four months. The last twelve months have been great for our justice programs, but our now development work needs to play catchup to keep those expanded programs running. So our use of your system we will be quickly put to an important test!We will let you know how we do. In the meantime, please accept our deepest appreciation for your sharing of your time and expertise.