John Cullinane formed the first successful software products company in the computer industry at a time when industry gurus said that it couldn’t be done, others had tried and failed, and so would he. However, his company’s IPO succeeded so dramatically that it proved to Wall Street, and the computer industry, that a great deal of money could be made from treating software as a product. Many software companies followed and an industry was born.

However, like any entrepreneur, he had to manage his company through the four phases of any new venture which always begins with the idea, then the struggle to bring the idea to life, the heady success days when it all works, and the inevitable days of trouble.

That’s what the Cullinane Active Archive is all about. Providing a body of information that is easily accessible that will help entrepreneurs no matter what stage of the entrepreneurship process they may be at. This, most importantly, includes both a messaging page as well as a values page that emphasizes that integrity is not a burden but rather a great asset to any enterprise. The Active Archive includes as many videos and podcasts as possible with John explaining the material first hand. This includes key videos and papers associated with both his remarkable corporate and social entrepreneurship initiatives.  These include major events and awards, but also includes a featured partnership and family page. This is because family members are often a big part of any entrepreneur’s undertaking.

The following are excerpts from his book, “The Entrepreneurs Survival Guide — 101 Tips for Managing in Good Times and Bad.”

Messaging — A good sales message is critical to the success of any company, social entity, or political campaign. The only problem is that it is impossible to get a group of bright, opinionated individuals to agree to a message. This is why John Cullinane had to invent a process he calls “Main Message” to solve the problem. Any entrepreneur can use it. more »

1. Idea Phase — Ideas are quite easy to come by but bringing them to life is extremely difficult. Thus, the wise thing for any entrepreneur to do is determine whether the idea is any good in the first place. The best way to do this is to try to get some of the best prospects to sign a non-binding Letter of Intent. An often and very successfully used example is as follows: more »

2. Start-Up Phase — This phase is really the survival phase. It takes a very astute and flexible entrepreneur to get through it. Having good sales messages will help enormously in raising money, selling the new company’s products or services to prospects, media, etc. Also, included are his tips for the very difficult and critical Start-Up Phase. more »

3. Success Phase — If the entrepreneur is very lucky, his or her company will eventually move into the success stage. This can be a very heady time as the new venture takes off, gets visibility, etc. However, the challenge is how do you keep it going and not lose its momentum? One way to do it is to avoid building a fancy new corporate headquarters. more »

4. Trouble Phase — The greater the success any entrepreneur has, the greater the chance for trouble. Sooner, or later, trouble happens to all successful entrepreneurs, often for different reasons. Some survive, many don’t. Thus, the questions are why do things go bad and what can be done about them when they do? One most important way is to save cash at every opportunity. more »

Values — Most new entrepreneurs have yet to learn that values are a very important part of any new venture and will serve them well when they go though the four phases of entrepreneurship. For example, integrity is not a burden in business, but a great asset. Some others are as follows: more »

As a social entrepreneur, John created the Boston Public Library Foundation, was the first President of the John F. Kennedy Library Foundation, and the Founder of the Friends of Belfast. He also was a member of the Aspen Institute’s Middle East Strategy Group. John is a graduate of Northeastern University and an Honorary Degree recipient.

A Related List of Papers and Videos are as Follows: 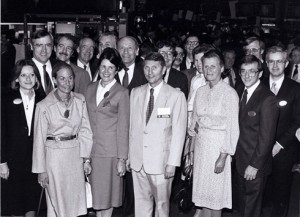 Cullinane Board members, management, and spouses on the floor of the NYSE watch first trade of company stock on ticker.

John Cullinane Irishman of the Year of the Award

President Clinton’s “Days Like This” video of his first trip to Belfast, Northern Ireland, where he introduced two of John Cullinane’s job-creating initiatives, including an Irish BIRD (Binational Industrial Research & Development Foundation)

Laying of the Wreath Over the SS Laurentic in honor of Walter Fitzgerald, John Cullinane’s uncle, lost in WWI